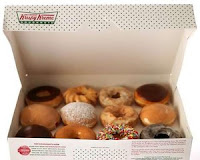 Today, June 4 only, stop by Krispy Kreme or Dunkin Donuts for a free donut (limit 1 per person) for National Donut Day. No purchase necessary.
FUN FACTS:
National Doughnut Day began in 1938 by the Chicago Salvation Army. It was a fundraiser to raise money during the Great Depression as well as to honor the volunteers who made and served doughnuts to World War I soldiers. Did you know that during WWI, women volunteers were sent to the front lines of Europe to prepare and serve homecooked meals and treats, like doughnuts, to the soldiers there? Apparently, it wasn't uncommon for these women to cook doughnuts in oil inside an American soldier metal helmet! (info courtesy of Examiner.com
Hurry on in and gets yours today!!!! :)