I was sitting in the waiting room at the doctor's office today, just reading a magazine and minding my own business, when I started hearing 2 fellas talking that were sitting near me.  At first, their voices were just a low drone in the sea of other waiting room noises, but as time went on, their drone became more of an annoyance; these two gentlemen were bound and determined to solve ALL of the world's problems right there and then.  By the time they got to conquering ObamaCare, I thought I was (a) going to have to wring their necks so I could get some peace and quiet, or (b) wring their necks so I cuold get some peace and quiet.  Seriously.  Why do some people talk just to talk?  Couldn't they see that I was already nervous enough without their chitter chatter?  Honestly....some people!

Finally, they called my name and hubs and I went to get my weight and blood pressure checked.  Hubby commented on my elevated blood pressure and I informed him that it was high because of those 2 in the waiting room.  The nurse said that my doctor was running behind, so if we wanted to go and get a drink or something, we had time to do that.  Then, he (the nurse) kind of grinned and told me that I had permission to go and sit in the other waiting room so I didn't have to go and sit by those 2 guys again.  YAY! 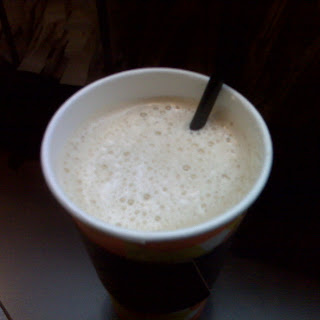 Earl Grey Vanilla Creme tea with skim milk
It was heaven in a cup...smooth, creamy, warm....ahhhh....we got our drinks and went back to the Other Waiting Room and it was so nice....not crowded...not noisy....plenty of magazines to read....I was in heaven.  I settled in and started reading.  Life was okay for the moment.
THEN,  I spotted Him.  One half of the ObamaCare debate team was heading towards "My" waiting room.  I gulped another sip of my prozac tea and tried to hide behind my magazine.  A few seconds went by and I peered over the cover.  I saw that he was now with a blonde woman,  and a very distraught-looking young woman.  Hmmm...now my curiosity was piqued.  I forgot all about my annyance with him and decided to figure out what was going on.  Why was the girl upset?  Who was the blonde with him?  And, more importantly....where was the other fella??